The report is out —and it's not good news

Divest Oregon is a diverse coalition of individuals and organizations representing unions with PERS members, racial and climate justice groups, youth leaders, and faith communities advocating for the Oregon State Treasury to divest its $130 billion from fossil fuels. Eugene 350 is a member of the coalition. We have three asks:

1. Immediately: No NEW investments in fossil fuels since they pose a financial, health, and climate risk to Oregonians.
2. Annually release a public list of all portfolio holdings in every asset class.
3. By 2026: Transparently phase out all CURRENT fossil fuel investments and move to climate-safe investments, using a social justice framework that accounts for the climate impacts on frontline communities across the state, including rural communities and communities of color.

After significant effort, the treasury did finally reveal their holdings. Experts analyzed the data and published a report in April, “Risky Business: Oregon Treasury’s Fossil Fuel Problem”.
The report included several astonishing findings, including--
We strongly encourage you to view a summary and this well written 18 page report at https://www.divestoregon.org. 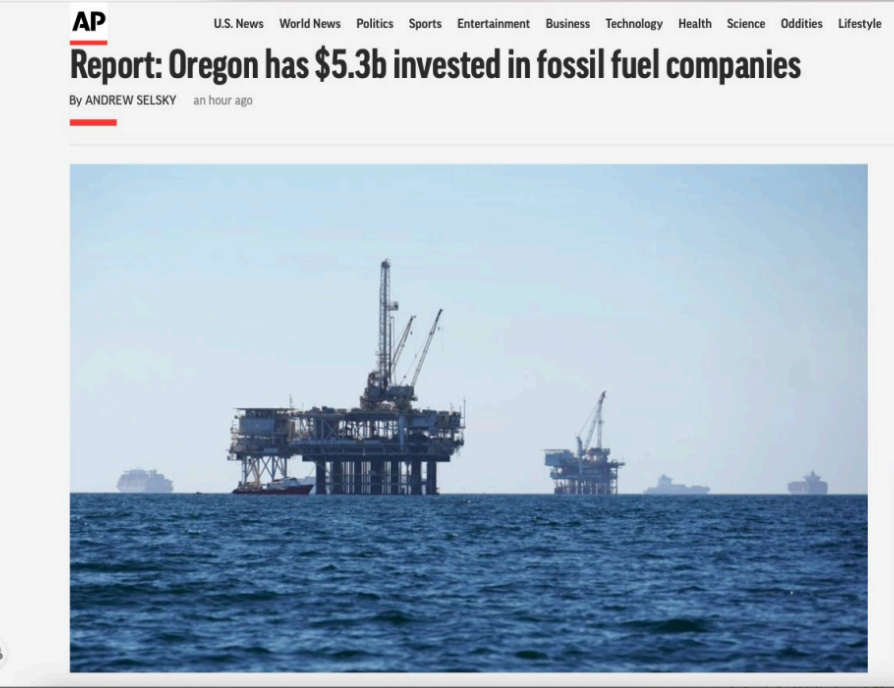 This campaign began in the late summer of 2020 with a public pressure campaign to demand that State Treasurer Tobias Reed and the Oregon Investment Council (the agency responsible for Oregon’s investment decisions) publish the state’s investment holdings (over $130 billion, $90 billion PERS alone) and begin divesting from fossil fuel companies. The pressure campaign had an effect, but not the one we wanted. Treasurer Read found the issue too hot for his liking, so he dumped the whole issue into the lap of the legislature. This brings us to Divest Oregon’s current focus of energy, the Treasury Transparency Bill.

The first step in divestment is knowing what investments we currently hold. It took four months and a concerted email and phone banking campaign to finally get the information from the Treasurer and the Oregon Investment Council in December 2020. It shouldn’t be this hard to learn what our money supports.

Divest Oregon leaders spoke with Rep. Pham from the Portland area who co-sponsored this bill for the short 2022 session along with Rep. Holvey from the Eugene area (!) and Sen. Golden from Southern Oregon. Read their Op-Ed in the Oregonian about the bill.